On March 11, I flew to San Antonio, Texas with a delegation of 7 other people, to go to the border and witness the crisis of the people who are seeking asylum, and Trump’s “Migrant Protection Plan” policy, which keeps them all in encampments just on the Mexican side of the border. We rented 2 cars and drove to Brownsville, which was a 4 hour drive, and then stayed in an Airbnb. 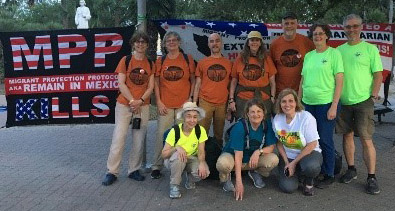 We woke up the next morning to a posting asking all volunteers to cancel plans to come to the border because of the corona virus. So we had no idea whether we would even be able to help. We went to Xeriscape Park, directly across from the border bridge to find out what was going on. This is where Josh Rubin and others have been protesting daily, bearing witness. Josh Rubin started the “Witness at the Border” action there in January. One of the protesters told us that the tent courts (opened in Sept. 2019 after MPP started) were right there across the street, and that we should go check to see if we could come in and observe. This is where the asylum seekers, who are camped out on the Mexican side of the border, go to have their legal hearings.

We were told that we could come back in 15 minutes for the afternoon session. So 6 of us quickly put things in the car that we weren’t allowed to take in (pretty much everything), and we went back. After surrendering our ID’s, they brought us into a waiting area which was very cold. It seemed very similar to what they call the iceboxes where people are held in this country. A security guard told us the rules and assured us that they are taking good care of the migrants and their children. The guard was Latino, and he ended up telling us that this is the highest paying job in Brownsville, which is a depressed area with not many opportunities. This was the reasoning he gave for doing what he does.

After about 45 minutes, they let us go into the courtroom. They had to ask permission from the judge first. We sat in the back and were not allowed to make any noise or to communicate in any way with the asylum seekers. The judge, the interpreter and the homeland security officer were there via video conferencing, on a big TV in front. When called, the asylum seekers took turns coming up to the front to sit in front of the judge on TV. The first woman to appear was the only person we saw who had a lawyer. Her lawyer was connected via phone. She’s been waiting for 4 months already and her lawyer had already submitted her application for asylum. However she was told that she needed to submit photos of her injuries to show that she was in danger and needed asylum. They then set a new court date and sent her back to the camps.

The next person to appear was a man and his young son from Honduras, who evidently didn’t submit everything they were supposed to. He said he would be killed if he went back to get the other papers he needed. But he was also given a new court date and sent back to Mexico. The judge gave him a copy of the Honduras Human Rights report in English, and told him that he could go get it translated if he wanted to (obviously not at all possible for him to do).

The next family used online translation to help them fill out their application. The judge told them that this was not acceptable and that they needed to have a human translator who could sign their form and ensure that they filled it out correctly. This is practically impossible for them to access. (We wanted badly to raise our hands and say that we could help them!) The man said that they have safety concerns about returning to Mexico. The judge said that they could talk to someone about that after their hearing. The woman was in tears as they left the room.

Next came a man and his son, who were from Guatemala and spoke the indigenous language, K’iche’. They didn’t have an interpreter who spoke their language, so they had to re-schedule their hearing. The judge made a comment, calling it an “exotic language” as an excuse for not having an interpreter.

The last 2 people to be seen were a woman and her 12 year old daughter, who kept looking back and making eye contact with us. There was a total miscommunication between the judge and this woman, and she obviously didn’t know what to say or do. He said that there was no record that any lawyer had submitted evidence in support of their application. The woman said that she had spoken with a lawyer and thought that the lawyer was going to submit their papers. She also expressed fear of going back to Mexico because it wasn’t safe. They were also sent back to the camps.

There’s a quota regarding how many asylum seekers are allowed into the US per year – and in 2019 that meant 0.1%, or 11 out of 10,000.
In addition, the tent court judges are Dept. of Justice employees who are ordered to consider asylum seekers guilty of trying to game the system and worthy of deportation, before their hearings even begin.

*This information is taken from a blog written by Sarah Towle, called “An Unlikely Witness to Trumps Kangaroo Courts”

On Friday morning, some of our delegation got up at 4 am to go to the airport and witness people being deported. They didn’t get a very good look because the airport officials parked their fuel trucks in the way so that they couldn’t be seen doing what they were doing. This is also why they do it before dawn. However, others have gotten pictures of the people being deported in shackles and handcuffs. These deportees are sent to Guatemala or El Salvador to apply for asylum there. They often don’t know where they are being taken until they get there. 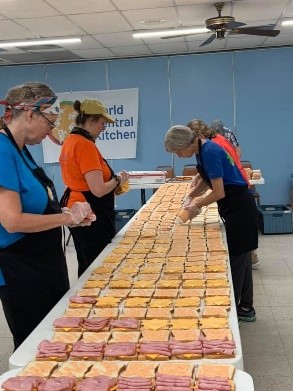 We found out that we could still volunteer with World Central Kitchen, so we did a food prep shift from 11-2 on both Friday and Saturday. World Central Kitchen took over for Team Brownsville when it became too much for them to handle. Team Brownsville was started by Andrea Rudnick, her husband and their friends, and for a long time they were providing meals to the camps in Matamoros every day by themselves. Their fundraising has provided not only food, but also water and porta potties to the encampment in Matamoros. No one else was doing anything to help them. According to MPP, the Mexican government was supposed to be taking care of them. But they have done nothing.

We learned how to make sandwiches the WCK way, with lots of calories and protein. We were prepping for 1000 people, and the sandwiches were to be taken to the camps the next day to be used for lunch the following day, along with bringing dinner for that night. There are over 2000 people in the encampment. 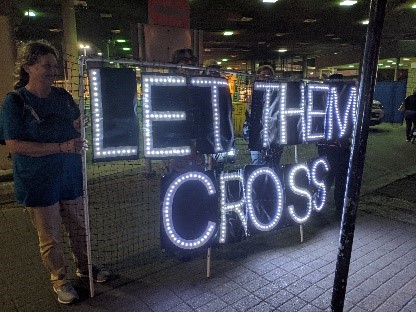 Shine our light on the border

Saturday evening we went to the border to take part in the “Out of the darkness, bring your light to the border” action, planned by Josh Rubin and others. After dark, we carried lit up signs and walked back and forth in front of the border bridge and by the border wall. This was meant to bring attention to the situation, mostly through social media. 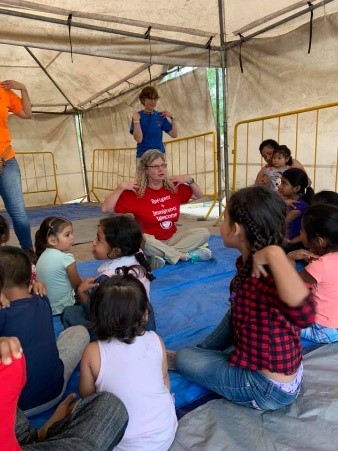 Escuelita in the camp (“sidewalk school”)

Sunday morning, we got up early to meet the other people who were crossing the border to do sidewalk school in the encampment. We walked across pulling wagons with supplies for the school. As we arrived, one of the local team Brownsville volunteers rang a bell to call the children to school. There were steps leading up to the camp, and there were men and boys waiting there to help us lift the wagons up the steps. We went to tents that are set aside for school, and we laid down tarps. Children were lining up according to age groups and each group went into a different tent. After a lot of planning to do a lesson, nothing turned out the way we expected, since we were given almost no information ahead of time. So we scrapped our prepared lessons and did what we could. The picture below shows us doing some yoga for children. A lot of moms and older siblings were there with the children and it took some time to coax some of the children in. But I enjoyed interacting with them, and it was clear that the moms were very appreciative of our efforts.

It wasn’t considered safe to go anywhere alone, although the encampment was composed of families with many children, who were malnourished and dehydrated. Any danger came from gangs and kidnappers who preyed on the families in the encampment.

When we walked back across the border bridge, the Latinos in line waved and thanked us for doing what we were doing. There are 2 lines to cross into the US. One for people with US passports, and another for everyone else. Our line went quickly, and the other one took hours for people to get through.

This was the last week of sidewalk school with volunteers, and other groups had cancelled coming. So after we returned from the camps, our delegation met to decide whether we wanted to leave early. Some of us felt anxious to get home for various reasons, and others wanted to stay as long as they could be

helpful. So 4 of us left on Monday and the other 4 left on Tuesday. (We were originally going to leave on Wednesday.) Those leaving Tuesday were able to help with food prep on Monday, but after that no one was even allowed to do that anymore. So it was clearly time to leave. 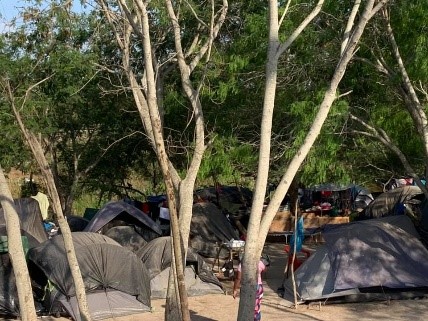 We left a big piece of our hearts with the families in the camps. And now it’s time to share what we saw and make sure that the asylum seekers are not forgotten. These people are us. We could be in their place. And they have no safe place to go. No matter where they end up, it won’t be here in our country, and it won’t be safe.

THE HEALING POWER OF AMENDS by Stephen Colladay So often the healing of racism between white Americans and African‑Americans seems to move at a glacial pace. It seems that no matter how hard we try, we don’t break through the barriers to reconciliation and unconditional love and respect for one another. Could it be that […]

For many years we ran a Spotlight On Service column in our newsletter, written and edited by John Daubney. John would interview members of the Unity community about their own sacred service to our ministry. This is a first installment in a new edition of Spotlight On Service by Peggy Kaufmann and perhaps other contributors. […]

Unity Church in Albany is deeply saddened and appalled by the recent killing of a black man at the hand of a police officer in Minneapolis this week. This loss of his precious life speaks to the racial divide that haunts American society and to the unbalanced use of force dictated by the color of […]

Updates from Your Board of Trustees May 21, 2020 Patricia Wood, Board Secretary History was made at Unity in Albany, with the first-ever online Town Hall meeting on Sunday, May 17th.  While the worldwide pandemic has forced us to adopt social distancing as preventative health and safety measures, our Unity Albany family has adjusted beautifully […]