A calendar is a useful thing sometimes. It provides a structure in which to view our lives, week by week and year by year. We could thank Pope Gregory XIII for this, I suppose (though ultimately our gratitude belongs to the sun, the moon and our ever spinning earth). Gregory is the dude who, back in 1582, came up with what we still call the Gregorian calendar, under whose dominion we still count our days. It replaced Julius Casear’s old Julian Calendar, which was off by 11 minutes a year. 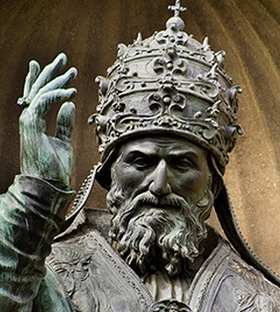 Eleven minutes seems a trifle, but by the mid 16th Century this had become a concern as the seasons were no longer matching up with solar feasts like Easter (which set the bees to buzzing in Gregory’s tall papal bonnet). The British Empire smelled a Catholic plot, though, and took nearly another 200 years before they became convinced of the need for change. By this time—1752—the Julian calendar was deemed to be off by a full 11 days. So it was that in mid-September of that year England and the American colonies finally instituted Pope Gregory’s calendrical plan, causing some to riot and causing the more forward thinking Benjamin Franklin to remark, “It is pleasant for an old man to be able to go to bed on September 2, and not have to get up until September 14.”

So another year has come and gone and these early days of 2018 give us the opportunity to pause and reflect and consider the months ahead. Unity really excels at taking advantage of this chronological juncture. We’ve just approached the flames of the Burning Bowl, releasing what is no longer working for us. We’ve written our “letters to God”, enkindling a new vision for 2018. And this Sunday we have the opportunity at our morning services with the White Stone Ceremony to allow that vision to further coalesce into a single word that will serve as our keystone for fashioning—with Spirit’s guidance—the framework of this new year.

That “with Spirit’s guidance” part is what is most essential. Allow these very cold, hunkering down days of winter to draw you into the silence of your being where you may begin to hear that still, small voice within. Notice the parts of you that would rather not do that, that would rather be busy and distracted, and tell them to stuff it! There is a Voice that would speak to your heart and direct your paths this year and always. It is the voice of your truest Self, of the Beloved, the soul’s Friend. Listen to the poet Rumi…

Listen to your essential self, the Friend.
When you feel longing, be patient,
and also prudent, moderate with eating and drinking.

Be like a mountain in the wind.
Do you notice how little it moves?

There are sweet illusions that arrive
to lure you away. Make some excuse to them.
I have indigestion, or I need to meet my cousin.

Live carefully in the joy of this friendship.
Don’t think, But those others love me too.

Some invitations sound like the fowler’s whistle
to the quail, friendly,
but not quite how you remember
the call of your soul’s Friend.

Let’s make of that Friend a deeper and dearer companion this year. Who knows what a year spent in the affections of that Company may bring?

Dear Unity Family and Friends, As we move from Summer to (hopefully) beautiful Fall days, we are delighted to be moving deeper into the Minister Search Process. As a Unity Church in Albany participant or member, you play a vital role in supporting the search effort! We invite you to discern whether you may be […]

MYRTLE FILLMORE’S DISCOVERY I believe life has to be guided by intelligence. “Life is simply a form of energy and has to be guided and directed in our body by our intelligence… by our thinking and talking.” . I speak words of strength and power. “I went to all the life centers in my body […]